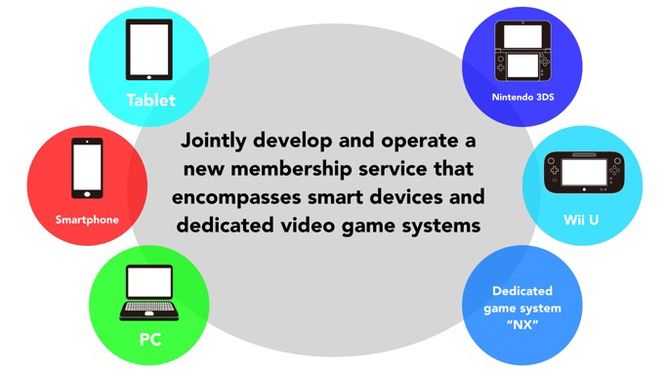 The first of which was the production of their newest console, the Nintendo NX. All that has been said about this by Iwata (Nintendo's President) was that it will be a new "dedicated game system...with a brand new concept." Little else has been revealed about the console and it seems we will still be a bit in the dark on this new machine until most likely 2016. In opposition to what the article (link at bottom) says, I personally believe this will be a new "version" of the Wii U due to Nintendo often re-releasing consoles but with something different or updated about them (Ref. The New 3DS XL and the Wii without Gamecube controller slots (what was the point??)) There were possible rumors of a "Nintendo Fusion" a fan made nickname, which would be akin to the Wii U, but with more power and on board memory, more of a console that would be meant to compete with the other two giants, Playstation and Xbox, as opposed to filling it's own little niche.

The second thing that came up was something that honestly makes me quite happy. It is fairly common knowledge that emulators run rampant on PC and mobile devices, with even some of the younger kids (like third grade) with Gameboy emulators on their iPods/phones. Nintendo finally has wizened up to this and while they have adamantly fought going into mobile gaming, have finally decided to bring games to mobile phones, tablets, and (the most exciting for me) to PC. What their plan is is to create a sort of cloud based account, that lets you log in on your 3DS, Wii U, Tablet, Ipod, PC or NX to play your games (? I'm going strictly off the small amount of information I have.) For me this is wonderful since I don't exactly have the money to buy a new console. Or really any console. So if I could play all these games from my computer that would be amazing, there are so many games coming out or that are out that I really want to play but just can't.

Well that's a little sum up of Nintendo's recent announcements. What are your guy's thoughts on these announcements?